To save progress, the N64 uses either an external Controller Pak or saves directly to the Game Pak. A few games don’t support saving at all.

According to Micro-64 the Controller Pak uses SRAM and the Game Paks uses either EEPROM, SRAM, or Flash.

EEPROM and Flash typically retain data for over 100 years according to Motorola and Microchip.

Data retention for SRAM has a more limited life span since it relies on a battery.

If you plug a Controller Pak in these days, your save files might be corrupted. Let’s disassemble the Controller Pak using a 3.8mm security bit to find out why. 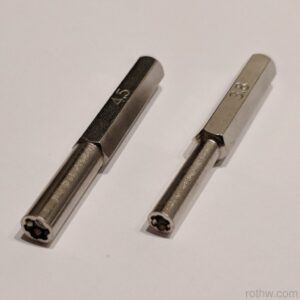 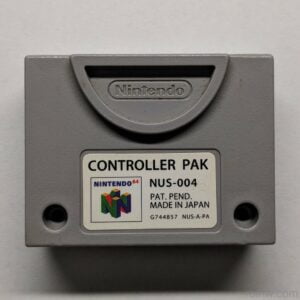 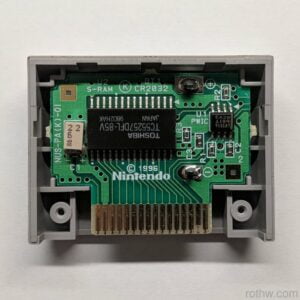 One option to prolong the life of a Controller Pak would be to just replace the battery, but let’s see if there’s a more permanent solution using non-volatile memory.

Looking at the datasheet again, this SRAM is 256Kbit organized as 32K x 8 in a 28-pin SOP package. The supply voltage was measured to be 3.38V.

After a quick search on DigiKey for non-volatile memory using these parameters, there were only 3 results in a few different package options. We’ll exclude the one EEPROM since the write cycle time is 10ms, which is 105 times slower than SRAM or FRAM.

Both datasheets state “SRAM compatible” and “Industry-standard 32K × 8 SRAM pinout”. Data retention is 151 years at 65C. The main difference between the two is supply voltage, 2V-3.6V for the FM18W08-SG and 2.7-5.5V for the FM28V020-SG, so either should work. Old stock might be labeled Ramtron since they were acquired by Cypress in 2012.

The SRAM can be removed with a heat gun, masking off the surrounding components with Kapton tape is recommended. Next, the pads can be cleaned with solder braid before soldering the FRAM, a Ramtron FM28V020-SG in this case. Finally, the battery can be removed using a solder sucker since it’s no longer needed. 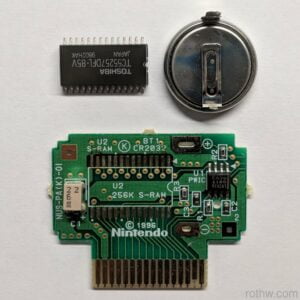 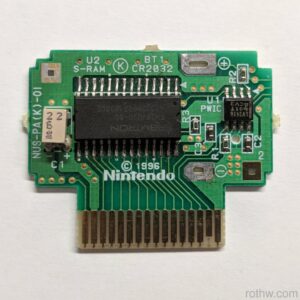 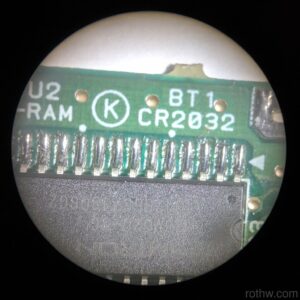 Most games that use the Controller Pak will identify the new memory as corrupted and ask to repair. After repairing, everything works as it should.

We now have a solution that lasts more than a lifetime. Out of curiosity, let’s find out how long the battery backup solution should last.

Looking at a few CR2032 datasheets:

Graphs from the datasheet: 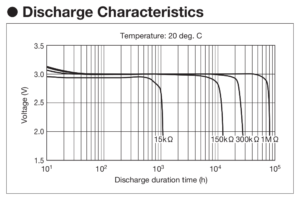 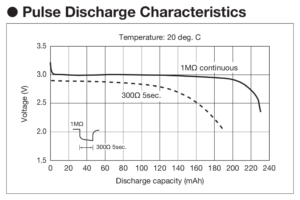 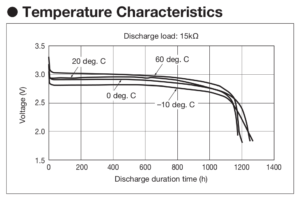 Conveniently and probably uncoincidentally, the CR2032 battery capacity is measured until the voltage drops to 2V, which is the same as the SRAM minimum data retention voltage.

The battery will be drained by the SRAM, but also from self-discharge. Let’s look at these two factors individually and then combined.

A capacity of 235mAh will be used since 220mAh is for a nominal discharge current of 0.2mA (200uA) which is much higher than this application. This is approximately where the “1 Mohm continuous” line intersects 2V on the Pulse Discharge Characteristics graph (1 Mohm is 2-3uA at 2-3V respectively, which is much closer to the standby current).

Formula for time in years

The CR2032 that was removed is a Maxell, so we’ll use a self-discharge rate of 1% per year in future calculations.

Substituting and solving for current

Substituting and solving for self-discharge time

Substituting and solving for typical standby current and self-discharge

Substituting and solving for maximum standby current and self-discharge

Since we have an actual data point, let’s see how close it matches the calculations.

The CR2032 that was removed has a date code that’s 21 years and 9 months old (21.75 years). Using the 1Mohm line on the Pulse Discharge Characteristic graph since it’s the lowest current draw (3uA at 3V) shows that at 2.5V it has consumed about 230mAh.

Next let’s determine how much capacity is left until the battery reaches 2V.

We’ll use the 1Mohm line on the Pulse Discharge Characteristic graph again. The plot seems to drop somewhat linearly after 2.6V, so let’s approximate the slope:

Determining the capacity remaining from 2.51V to 2V

Let’s disassemble a Game Pak that uses an internal SRAM. 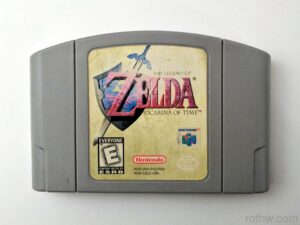 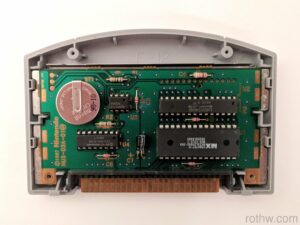 The memory can be identified as Sharp LH52V246A. Unfourtunately no datasheet could be found after an hour or two of searching.

The CR2032 battery has a date code that’s 21 years old. Using the 1Mohm line on the Pulse Discharge Characteristic graph, 2.5V has consumed about 230mAh.

First lets estimate the total capacity used. The graph shows 230mAh used at 2.5V. The slope after 2.6V has been determined to be 10mAh/V. Then the voltage drop after 2.5V is

Multiplying by the slope to determine the addition capacity used

Adding to the 2.5V capacity

Determining the capacity remaining from the measured 2.32V until 2V

Using the historical current draw of 1.26uA to determine the estimated time remaining

Compiling all the results:

Nominally, the battery will be drained to the point it can no longer retain data after 47 years. Worst-case though, this could happen in 12 years. Using one Controller Pak and Game Pak as data points, 21-22 years was estimated which is reasonably somewhere between the nominal and worst-case calculations.

Therefore, it’s not unreasonable for a Controller Pak or Game Pak with an original battery to no longer retain data these days. Luckily, non-volatile memory that’s a drop-in replacement is relatively inexpensive and readily available.